A Brief History of the Corona Historic Preservation Society

After the City’s unenlightened urban renewal efforts of the 1960’s, many Corona residents became sensitive and attuned to any mention of proposed changes, construction or demolition within the downtown “Circle.” Soon after the Carnegie Library, located at 805 Main Street on the east side of Main Street at the intersection of Eighth Street, closed its doors to the public in 1971, concerned citizens made numerous attempts to save the library.  In July 1972, the Historical Society of Corona was formed and formally recognized as a non-profit organization in July 1974.  The principal goal of this organization was to preserve the architecturally beautiful, Classical Revival style, 1906 Carnegie Public Library structure.

Rehabilitation of the 66 year-old library was estimated by the City Manager to be in the neighborhood of $500,000.  The City Staff and the City Council considered this cost to be excessive, and the property was ultimately sold, making demolition of the structure a likely result. Apparently competitive bids were not sought.

The Historical Society was successful in getting the Carnegie Library nominated to the State Register of Historic Landmarks and Buildings and to the National Parks Service, National Register of Historic Places, which was effected June 29, 1977.  When Jean C. Bobbitt resigned as President on October 25, 1977 to accept a position as President of the newly formed Riverside County Historical Congress, no one stepped forward to keep the Society active.  From November 1977 to May 1983, there was no recognized public or private entity to oversee the preservation of Corona’s historic structures and programs.

Unfortunately, neither the Historical Society nor the City was able to secure federal or state grants or local assistance to restore the building, and on a Sunday night in April 1978 this once bustling Corona landmark became a pile of rubble to make way for a Pioneer Chicken, fast-food franchise. As a sore reminder of the library’s disappearance, the franchise was never built and the lot remained unimproved for 38 years when a medical office building was finally constructed. Tor many years, the Carnegie Library was the answer to the Corona Trivia question, “What used to occupy the weed lot at the corner of Eighth and Main?”

In 1982, a grant to survey historical resources in Riverside County became available and local volunteers identified more than 600 historic and architecturally unique or significant buildings still standing in the City of Corona.  Despite the demolition mentality of urban renewal proponents and normal attrition from decay and lack of care, numerous historic structures remained within our city.  Many of these volunteers felt that these structures simply needed an advocate to assist in their preservation, restoration, and/or adaptive reuse.

On May 14, 1983 an organizational meeting was held with 35 of these volunteers and other interested persons in attendance to discuss preserving Corona’s historic structures, means of educating residents and others of the city’s unique heritage and other preservation opportunities.  An overview of what other cities were doing and what other things could be done was given.  There was a great outpouring of interest.  People found great value in having a common interest and sharing the goal of serving Corona by saving and restoring things of an historic nature, to perpetuate the history for future generations of Coronans. At a subsequent, well publicized meeting in the multi-purpose room of the Public Library, on June 8, 1983, the Corona Historic Preservation Group was organized. This Group was instrumental in bringing together the enthusiastic and diverse volunteers, who had worked on the survey, members of the Historical Society and others for monthly meetings where the preservation of Corona’s heritage was the topic of interest.  Attendance at most meetings was typically 30 to 40 persons.

On April 21, 1984 a meeting was held between remaining members of the old inactive Historic Society of Corona and members of the Corona Historic Preservation Group.  The Historic Society leaders proposed deactivating their organization and conveying all remaining funds to a new organization with a new name, and combining their resources so that there would be “one voice” advocating preservation of Corona’s heritage.  What emerged was the current Corona Historic Preservation Society (CHPS).

The photo below appeared in the Corona Daily Independent in May of 1984:

The main goal of the CHPS was and is a three-pronged effort to ensure that Corona’s history is not ignored, done away with, nor forgotten, by:

•     Educating the community on the meaning of preservation,

•     Acting as community spokespersons and advocates within the political process to ensure preservation,

The CHPS logo, seen above, incorporates the velocipede, or “penny-farthing” bicycle image, and was adopted shortly after the society’s organization. The large round front wheel was to remind us of Corona’s historic circular Grand Boulevard. The Society became a 501(c)3 non-profit, public benefit corporation during this period.

For more than thirty-five years the society has provided a variety of educational programs, including lectures on historical topics, production of the video “Corona’s 100 years” during Corona’s centennial year, a walking tour of the exteriors of several historic homes, periodic tours of historic homes, an annual Cemetery Walk, since 1995, where actors provide information on notable Coronans buried in the local cemetery, published the booklet “Corona-Citrus, Races and More,” awarded Saving’s Bonds or monetary gifts to CNUSD students who have done meritorious History Day projects involving local history, contributed dictionaries to Lincoln School third graders, in conjunction with the Corona Kiwanis Dictionary Project, and other assistance to the Corona-Norco Unified School District in providing updated and interesting curriculum for the teaching of Corona’s history at the appropriate grade level. 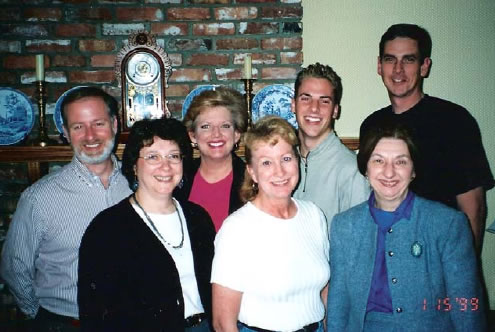 To further promote preservation awareness, the society has placed 25 historic markers (as of this posting in 2018) throughout the city to recognize historically significant sites as a part of its Historic Site Marker Program.  Heritage Home Awards have been presented to owners of exemplary historic homes more than 75 years old or more than 50 years old with architecturally significant elements.  Assistance has been provided in the relocating of vintage homes to other sites when development threatened them with the wrecking ball. In 1998, the Victoria Hotel, originally built in 1903 as the Hotel Del Rey, located at 224 East Sixth Street was dismantled, placed in storage containers and moved to Corona Heritage Park, for future reassembly and adaptive reuse.  In addition, the CHPS was instrumental in placing the Woman’s Improvement Club Clubhouse (1988), Corona’s Second High School and Historic Civic Center (2005), the historic streetscape of the Grand Boulevard (as an Historic District in 2011) and historic Thomas Jefferson Elementary School (2017) on the National Register of Historic Places. In 1990, a nomination to the National Register of Historic Places was submitted for the Corona Theater/Landmark Building, but the listing was declined by the owner at that time. It remains eligible for national listing. In 2005, the Society took an active part in preventing the renaming of the historic Prado Dam.

Within the political arena, the Society has worked with the City to update the Heritage Inventory List as well as a Corona Register of Historic Resources or “Landmark List”, establish Historic Districts, identified with Historic District signs, in areas around Grand Boulevard and Main Street, and helped in the development of an Historic Element to the Municipal Code. More recently, the Society has provided the city with signs on adjacent lampposts identifying, for residents and visitors, Corona’s 10 Historic Districts listed on the Corona Register of Historic Resources and Heritage Properties. The Society has also provided  historic route signs for the old historic routes of State Highways 18 and 71 and for US 91.

CHPS co-sponsored, with the City of Corona, the re-establishment of the Corona tradition of neighborhood clean-up events.  The “Corona Beautiful – Celebrating Our Neighborhoods” program was begun in November 1998 to improve Corona’s historic core as well as provide community service opportunities to youth and adult volunteers who thought it was worthwhile and meaningful to clean up downtown alleys, streets, trees, yards, parkways and neighborhoods.

The Corona Historic Preservation Society served as a co-sponsor with Corona Beautiful events and played a major role in their success. CHPS Board members provided countless hours in planning and promoting all nine cleanup events.  They also arrived at the crack of dawn to register volunteer participants numbering between 500 and 1,000.  This program was active until 2003, when the City withdrew its support as being too costly.  In 2017 the Society was able to assist the City of Corona in implementing a “Corona Beautiful 2.0, Polishing the Crown”  program to to once again foster cross-cultural, city-wide selfless service to benefit the community as well as clean and spruce up the historic heart of Corona – the neighborhoods within the Grand Boulevard Circle. 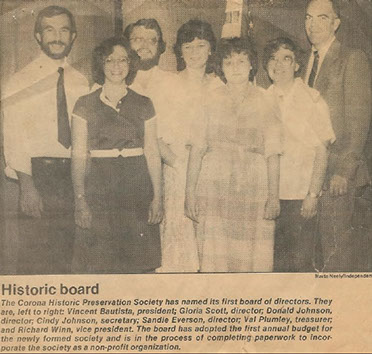 Most of the CHPS Board in 1999: (L-R) Front row: Gloria Scott Freel, Marla Benson