Community cleanups have taken place throughout Corona’s history starting in 1887 when early settlers were encouraged to “clean up your backyards, cart off the old tin cans, and burn the rubbish.”

During the early 1900s there was even an official City Beautification Committee. Throughout the years, accounts found in local newspapers reflect that “Clean Up, Paint Up” campaigns were a recurring theme. Citizens were urged to “clean your property until it is spic and span.”

On June 17, 1998, the Corona City Council adopted the Downtown Corona Revitalization Specific Plan which had worthwhile objectives to improve the historic core. Shortly thereafter plans were conceived to implement this revitalization effort by way of a cleanup program.

The official title of this community event was “Corona Beautiful – Celebrating Our Neighborhoods,” although it came to be known and discussed as “Corona Beautiful”.  The original concept was for cleanup and improvement efforts to be focused on areas within the Grand Boulevard Circle, quadrant by quadrant. The Circle has been the “heart of the city” since its founding in 1886 so it seemed a natural for the City to team up with the Corona Historic Preservation Society.

common good just as their predecessors had done. City workers 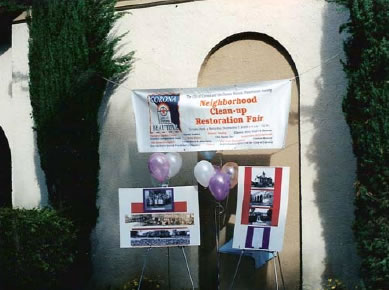 equipment” and vehicles to haul off debris. Corona Beautiful I was held in November 1998 when the focus was on the

southeast quadrant of the Grand Boulevard Circle. The staging area was at Victoria Park and included nearly 500 volunteers.

Victoria Park was once where the old Lincoln School once stood. An historic marker was dedicated at CB I in recognition of the Lincoln campus, built in 1889, and the importance it played in the fledgling community. 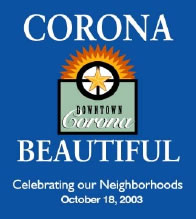 Co-founders of the “Corona Beautiful – Celebrating Our Neighborhoods” program were Ron Running, Principal Planner of the Corona Planning

Department, at the time, and Mary Winn, Society Secretary in 1998, and a founding member of the Corona Historic Preservation Society. The intent was to revitalize and enhance the historic heart of the city – the neighborhoods within the Grand Boulevard Circle. 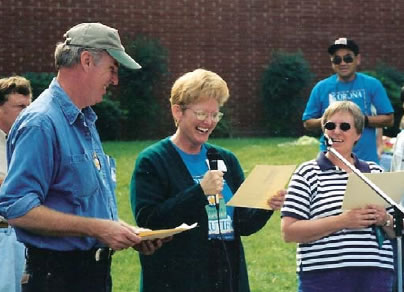 The City of Corona, CHPS and the City’s Redevelopment Agency co-sponsored the

four quadrants of the Grand Boulevard Circle. In subsequent events, the project areas

expanded to include other nearby areas. Volunteers accomplished a number of tasks.

Another house gets a facelift from the Rotary Club

Some worked by themselves

These young men worked together gathering trash bags at CBIV

From the official report, of the October 2001 event, presented to the City Council, one can get a flavor of what can be accomplished when we unite as a community to improve neighborhoods:

The above totals are only a portion of the important work done by volunteers when we unite as a community, work with one another: Girl Scout Troops, Boy Scout Troops, Cub Scout Packs and Dens, groups organized from churches, leadership groups, service groups and clubs from the local intermediate and high schools, families, service club members, friends and neighbors all worked together on beautification and cleanup projects in our city’s historic downtown.

After CBIX in 2003, the City announced the Corona Beautiful program would go on hiatus for two years. Since then, however, the City has not initiated any discussion about re-establishing the community cleanups.