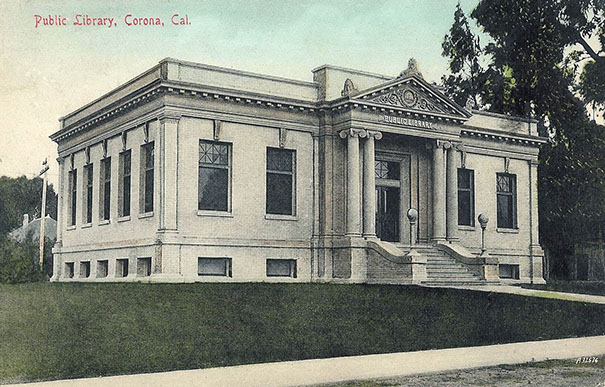 Early postcard view from the northwest, before the addition of any landscaping

Current Function: Demolished in 1978 and replaced with a medical office

This iconic Classic Revival style structure was built in 1906 with a $10,000. grant and

$1,500. supplement from the Andrew Carnegie Foundation and some $500. in locally

contrasted with its cream colored walls and pillars. There were large fireplaces in each

time patrons. Sadly, rather than repurposing this treasured building, it was abruptly demolished

in 1978 to make way for a Pioneer Chicken franchise, which was never built. A 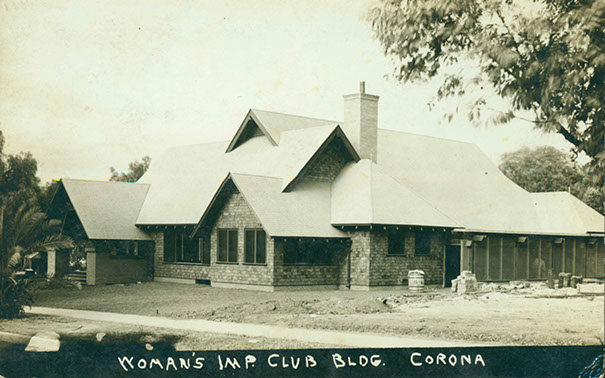 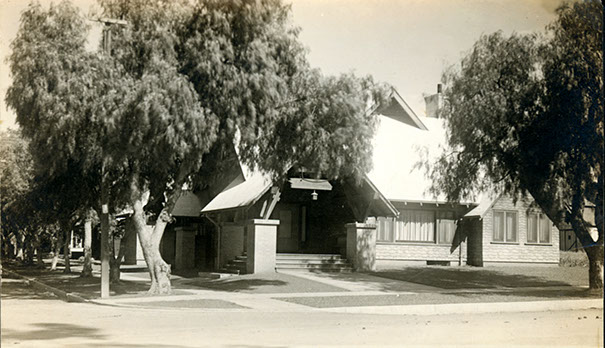 Views while under construction

The Woman’s Improvement Club Clubhouse sits on the southeast corner of Main Street at Eleventh Street. It was built in 1913, in the Craftsman architectural style, with some additional period revival modifications, by Los Angeles architect Thomas E. Preston, based on details from an anonymous Welsh church. The building has been in continuous use by a service organization since its construction.

Although the structure was copied after a church, the building appears more like a residence with an old-fashioned porch welcoming visitors to the front door on the Main Street side. Main Street side. The corner porch has a plain wooden bench and an original metal craftsmen light fixture. A wooden flagpole extends from the tie beam above the porch roof and is reminiscent of wooden crosses placed at gable ridges on Old English churches. The clubhouse is a detached one-story woodframed structure which is nearly T-shaped. Dark brown painted wood shingles sheath the exterior walls above a beige brick foundation. The chimney and porch piers are of matching brick.

Covered by white lace curtains and trimmed with narrow wooden molding, several types of windows are found in the clubhouse. The large ribbon windows in the parlor illuminate a gracious room with period furniture and an attractive brick fireplace. On the wall above the mantel are two carved oak panels; they are florals and not identical to each other. These panels are original and were created by a local doctor who offered them as a gift on “Cornerstone Day.” Several original interior doors and hardware are still in place.

Beyond the parlor is a large meeting room with a small stage that has seen hundreds of programs and performances. The trough for footlights on the stage has now been removed, but the fervor of past productions remains the same. Rooms to each side of the stage allow nervous performers to rehearse their lines and change into costumes. In the meeting room, the vaulted ceiling has exposed wooden beams with steel connectors and rods. Four sets of double doors with two-over-two glass in the top halves separate the south side of the meeting hall from the enclosed sun porch.  At the west end of the meeting hall, five very large wood-paneled doors fold open or slide closed to divide the hall from the parlor.

The small south wing on the west wall houses the kitchen with its modern appliances, and has casement and double-hung windows. Camellias and roses from the outside landscaping are sometimes used to beautify the already attractive interior. t. A bronze marker memorializing the structure’s listing on the National Register of Historic Places in 1988, is found on the right front porch post. 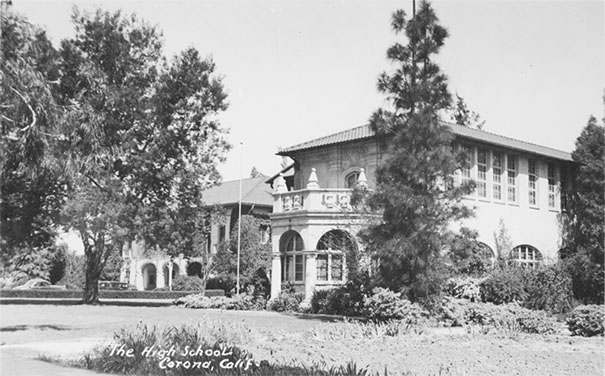 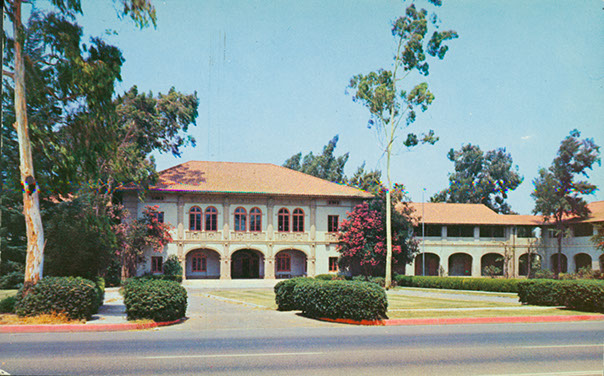 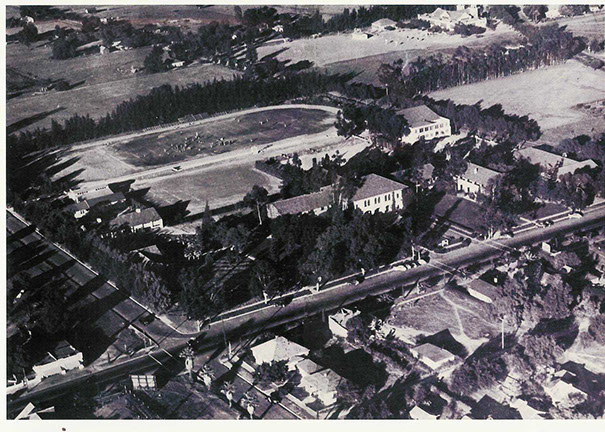 The main building is set behind a beautifully landscaped lawn with a central fountain,that re placed a U-shaped driveway constructed in 1926, from the street to the entry portico. This two-story structure is built in Mediterranean – Spanish Revival style achitecture, with various rectangular sections. There is a large sunburst window above the front doors beneath the portico’s arches.

The auditorium at the center-rear of the building is characterized by the use of massive wood trusses to support the roof resting on reinforced pilasts. Classroom wings with covered breezeways extend to the east and west of the auditorium.

The structure immediately to the east and south of the east wing of the main structure, was constructed in 1931 of reinforced concrete and was used for classrooms/library. A half-round second floor balcony on the south end above the library’s ever present round “study hall” table and reading area. The balcony was accessed by a flattened arch doorway. Above the doorway is found a marvelous coat of arms characterized by an oval shield on the scroll edged escutcheon with the lamp of learning and an open book depicted. To each side of the escutcheon is found a student, a girl on the left, a boy on the right, each with an open book in his/her hands. This structure served as the City Manager’s office for many years. The structure farther east was used for the school cafeteria, food preparation areas and the Domestic Science (home economics) Department. North of the home economics structure is the school gymnasium which has complementary architectural elements remains in use at the present time with City Parks and Community Services recreation athletic activities.

Construction on the main building began in 1923 and it opened for students September 11, 1923. The three arches over the recessed entry portico are embellished with columns, cornices and various moldings. Fourteen (14) ornate low relief carvings/ castings appear below the second floor balconet railings above the entrance, and also on the side windows. Three themes (learning, natural sciences and fine arts) are repeated in these scroll edged escutcheon castings. A symmetrical shield with point at the bottom, a flaming torch at the top and a scroll and open book represent learning The natural sciences are depicted on an irregular shaped shield and represented by a globe, various engineering or astronomical measuring instruments and the sun, moon and stars. Fine Arts are represented on an oval shield by an artist’s palette and brushes, the capital (top) of an ionic column representing architecture and a partially rolled fabric or paper scroll on which drawings or paintings may be made. Six of these castings symmetrically highlight double arched second story windows corresponding to the open arches at the recessed front entry. Two escutcheons are located on the second story single window balconets to the left and right of the entry. Three escutcheons are located on the balconets of the triple windows located on the sides of the main entry façade. Under the eaves, characterized by sculpted rafter tails, are large oval vents with decorative vertical spindles. The central hip roof is covered with clay tile, the east and west end sections of the roof are gabled and are also covered with clay tile. 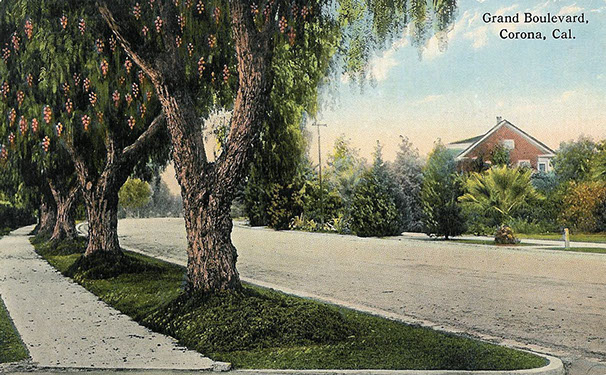 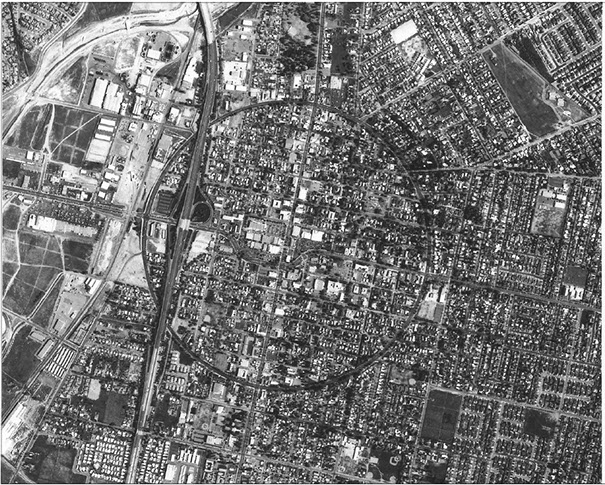 Also known as “The Boulevard” or “The Circle”

Location: A circular roadway 3 miles in circumference whose center Is located

“The Circle City” and is the only Boulevard in town.

The Historic District is within the existing right-of-way for Grand Boulevard and is one of the city’s original streets set out within the map of Lands of South Riverside Land & Water Company, recorded on February 12, 1887, in the records of San Bernardino County; prior to the establishment of Riverside County..

The map was surveyed and drawn in 1886 by Hiram Clay Kellogg, an Anaheim engineer of note. Anecdotally it is recorded that he also laid out the roadway in three days after a competing engineer indicated that it could not be completed in several weeks.

The roadway and original improvements were established in 1887 with the original circular configuration remaining intact to this day. The planting within the wide parkways contain many large mature trees, planted during the early part of the 1900s.

The unique circular roadway was a prominent design feature used as an automobile race course for internationally acclaimed road races in 1913, 1914 and 1916 to attract prospective citizens, businessmen and investors. For the 1913 race some 100,000 spectators were drawn to Corona. Racing legends competed here as well. One of the palm trees planted in the nineteenth century still bears the marks from a collision with one of the legendary racecars.

Grand Boulevard is a unique circular roadway, one-mile in diameter and nearly three miles in circumference, which has given rise to the longstanding moniker “The Circle City”, which makes Corona distinctive from any other city. The city’s only “Boulevard”, it contains wide parkways, large mature trees, and historic street lamps fronting the stately homes of the city founders and early city leaders.

The Boulevard continues to provide the downtown area with the small town ambiance that many Corona citizens remember from the past and continue to cherish. Many homes fronting this street are themselves either on the local Register of Historic Resources or are eligible for listing.

The Grand Boulevard Historic District is listed on both the local, state and Federal Registers of Historic Places. 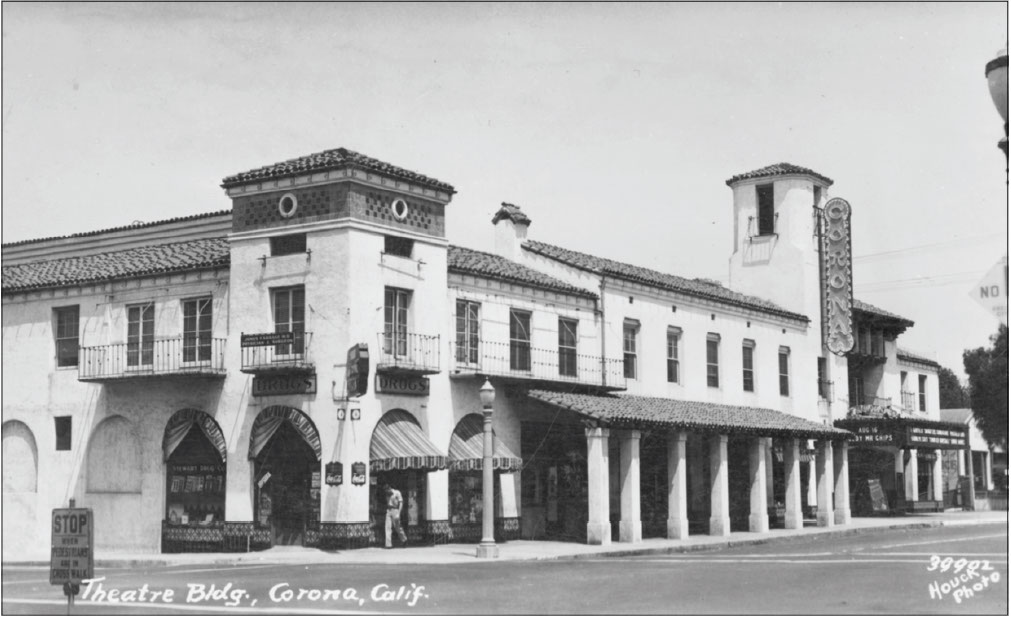 Also known as the Landmark Building

A Nomination to the National Register of Historic Places was submitted in 1990, It was favorably acted upon in 1991 by the California Historical Resources Commission but the owner declined national listing at that time. According to the State Office of Historic Preservation it remains eligible for listing should the owner remove the

objection to listing by sending in a notarized letter requesting removal of the objection..

The Corona Theater was constructed in 1929 in a Spanish Colonial Revival/Italianate style of architecture. The Corona Theater exhibits an extremely rare, and possibly unique, example of an Italianate façade within the 300 or so theaters designed by nationally prominent theater designers Carl and Robert Boller, Carl being the principal 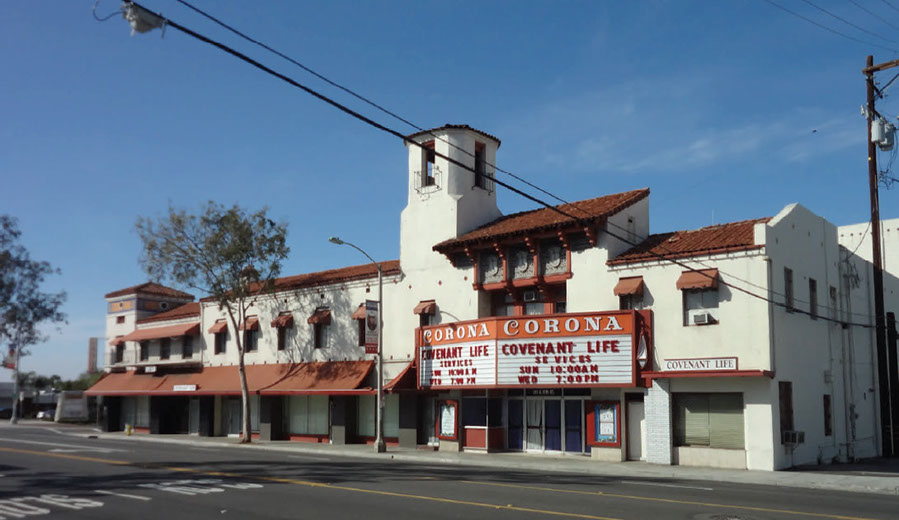 A view of the Corona Theater from the southeast in 2013 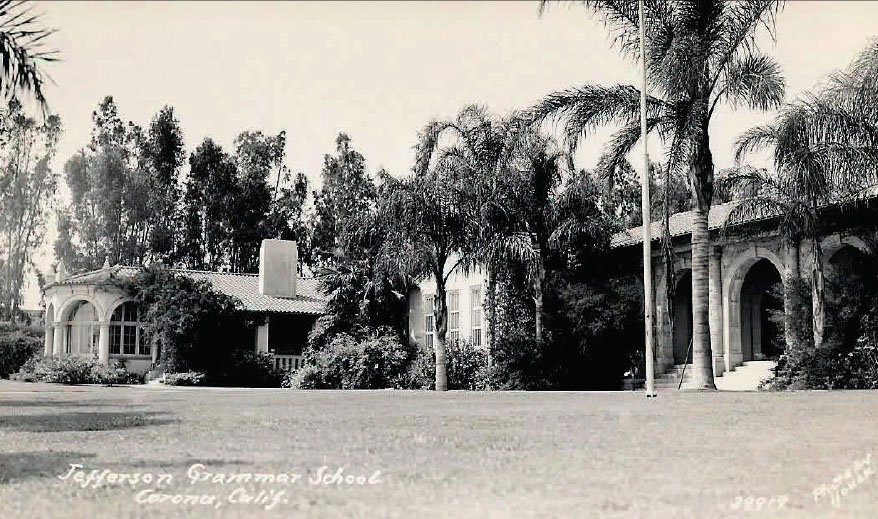 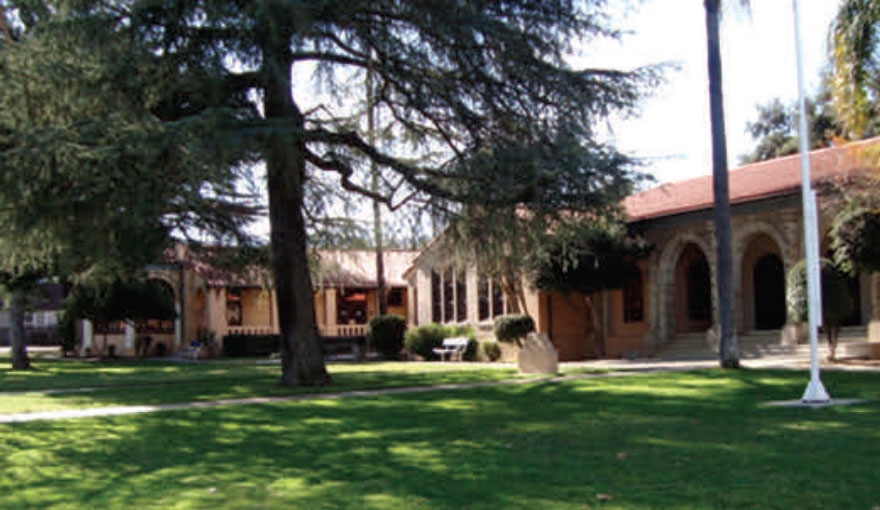 Thomas Jefferson Elementary School, located at 1040 Vicentia Avenue, sits on the southwest corner of Vicentia Avenue at Tenth Street.. It was built as a one story structure in the Spanish Colonial/ Mission Revival style and constructed in 1927 by noted architect W. Horace Austin. The south wing, with a complimentary design in the same architectural style, was added in 1931 and designed by famed architect G. Stanley Wilson Although designed as the school’s auditorium, including a raised stage, it is now the school library,

A reinforced concrete foundation supports the building. The stacked concrete base of the main building forms a shallow pier. There is a basement beneath the 1931 library addition. The stairwell leading to the basement has pipe railing, which was used extensively in the Depression era. The 1931 structure is primarily painted concrete with wrought iron elements.

The tiled, low-pitch, cross-gabled roof reflects the Spanish style design. The front entry on the library wing also features a wrought iron gate with the initials “TJ” for Thomas Jefferson, for whom the school was named. On the Tenth Street side, an exposed aggregate landing leads to the side entryway framed by two decorative concrete medallions painted blue.

The south wing, added in 1931, is separated from the main building by an open walkway with overhead cover and was originally built as an auditorium/multi-purpose room featuring a small, front-facing (east) rotunda with a rounded hip roof before the gabled rear rectangular mass. The façade of the rotunda is segmented into eight bays by round precast concrete columns supporting arched openings with carved relief detail, all topped by a thick cornice. The rounded columns pierce the roof to emerge as squared, pointed pinnacles. This mock pergola supports a moderate eave overhang and frames eight sets of three wood-framed, six-lite steel casement windows with red tile sills and arched dividedlight casement transoms. Remaining fenestration (window description) consists mostly of paired single casement windows with red tile sills separated by miniature pilasters. An end wall chimney is found on the north wall near the front of the wing, and a small,

arched breezeway near the rear. The pergola that runs the length of the north elevation with arched openings on each end is accessed by three concrete steps on the east and secured with double wrought iron gates on the east and towards the rear along the north elevation, and a gate also faces south within the former breezeway; all gates bear the initials, “T.J.” for Thomas Jefferson, for whom the school was named.